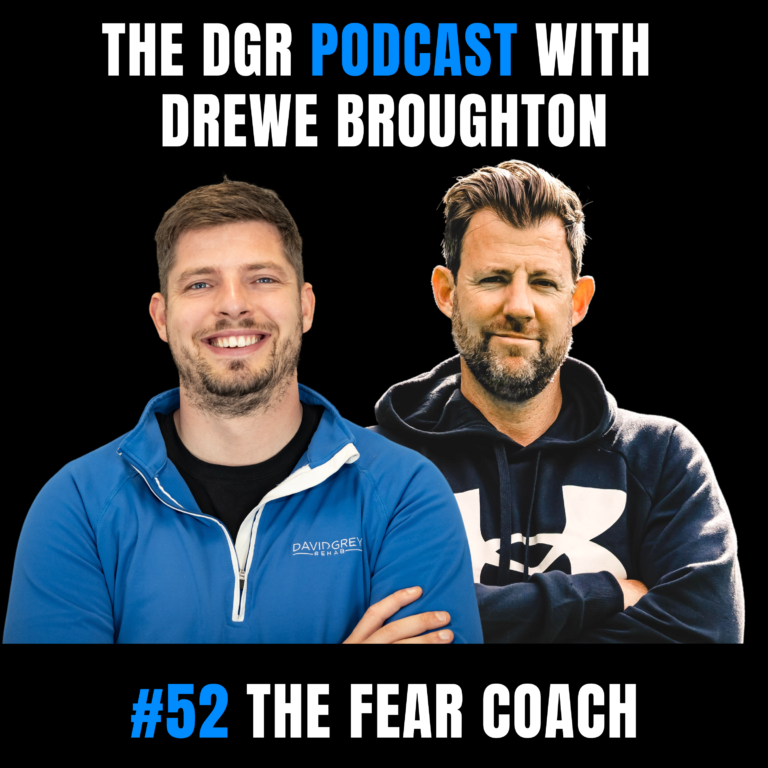 In this episode of The David Grey Rehab Podcast, I talk with Drewe Broughton, the Fear Coach.

Starting out as a professional footballer playing in the Premier League for Norwich city, and making the England U.20 World Cup Squad, Drewe had an illustrious career playing 600 professional games across 3 of England’s 4 professional divisions. Now Drewe works with both athletes and big businesses, helping them with problems in mindset and psychological barriers getting in the way of their peak performance.

Listen in as we discuss the effects of stress and fear on injury and recovery, and how big a part negative emotion can manifest itself physically on the body and performance.

You’ll also learn about how mental stress and the body interact, and how working on changing people often involves tricking them.

(00:16) – Introducing Drewe Broughton.
(02:12) – Do people want to do the work to change?
(03:43) – The importance of having time to yourself and surrounding yourself with accountable people for emotional high performance.
(05:42) – How David first came across Drewe, and the role of emotional awareness in sport.
(12:32) – The battle of being yourself in professional sport.
(15:08) – Causes behind Marcus Rashford’s fluctuations in performance.
(16:36) – Why fear? Drewe’s realisation and addressing of it.
(22:31) – The influence of stress on illness and injury, and public perception of this.
(24:16) – How perceptions of stress and fear present themselves in different walks of life including high level sport.
(30:16) – Physical challenges as an escape from stress and fear, and the importance of asking “why”.
(34:42) – Public perception of high level sport stars and the importance of emotional resilience in these positions.
(39:12) – Addressing your younger self, and the building and analysing of ego
(44:50) – Hiding in sport, how common this is, and training your mind to not do so.
(47:12) – Understanding the mind and controlling its negative impact on recovery.
(49:38) – Advice for coaches and therapists on helping clients emotionally and mentally, and the emotional draw backs often endured from succeeding at the highest level.
(01:01:21) Coaching businesses how to embrace emotional intelligence and stay at the top of their game. And walking the line of being emotionally aware and having moral compass whilst being successful.
(01:08:21) Thoughts on The High Performance Podcast.
(01:10:24) Closing thoughts
(01:12:20) How to connect with Drewe
(01:13:11) Outro and final thoughts from David

If you enjoyed this podcast, SHARE it with a friend and RATE/REVIEW it on Spotify or Apple Podcasts!

Check out our programs

“My name is Drewe Broughton. In 1986, aged 8, I set my heart on becoming a professional footballer at the very summit of the game. In 1993 aged 16 whilst a schoolboy and signed with Norwich City FC, I was asked to be in the squad for the First team in the Premier league against Everton, based on my performances in the U.15s. 6 months later In 1994 aged 16 I left school and home to move to Norwich and pursue my dreams. In March 1996, aged 18 I made my professional debut for Norwich City away at Wolves, scoring and getting rave reviews. Three months later I was in the England U.20 World Cup squad and signed a 3 year contract with adidas. I was tipped for the top with my talent and attitude.

In 2011, aged 33, 15 years, 100 goals and 600 professional games later, lived out across 3 of England’s 4 Professional divisions, representing 20 clubs; promotions, relegations, administrations, lauded, rejected, admired, mocked, I was retired from the game. No longer was I able to perform. A career spent dogged and undermined by soul searching and Fear, It culminated in me going into rehab for addictions. At the same time my agent died, my marriage broke down and I was homeless.

A natural leader at every stage of my life. Well educated, well raised with great morals, the confusion for many around me was enormous. For me it was even greater.

What I discovered about myself during my darkest hours, I will be forever grateful for.

Such hard earned wisdoms aligned with such vast experiences and exceptionally high emotional intelligence has enabled me to unlock the potential of a huge diversity of people from around the world. From Founders of businesses, to management teams, PGA golfers, International Footballers, Tennis players and many others.

I have appeared in and on, an array of media platforms from;
The New York Times , Sky Sports, Bt Sport, The Guardian, The Times, BBC, ITV
Discussing Fear and the ongoing lack of understanding around human performance and coach education.

I have found that the leaders and performers who have contacted me all have the same traits. That strong moral compass, sensitive, yet fiercely driven, relentless ambition to the point where nothing is ever enough. Traits that I hugely relate to, having had to battle that myself In a public and merciless industry for nearly two decades.

Today I combine my 1:1 coaching with athletes and business owners with consultancy, which has taken me around the world, I wrote and teach my education in Advanced EQ for leaders whilst hosting a growing community in my App; ‘The Fear’”

Connect with him on LinkedIn